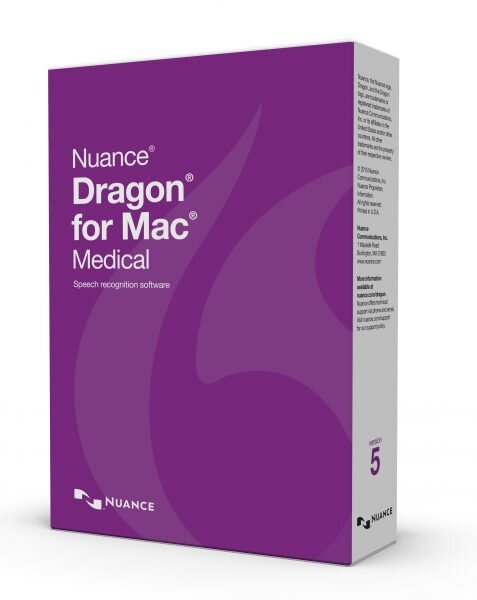 If you use Dragon® Dictate Medical for Mac® v3 or v4 for your healthcare documentation, you already know how much easier it is to fill out a patient encounter using your voice. Now, you have the opportunity to upgrade to a new version of Dragon with a new name: Dragon for Mac Medical v5.

In this article, we’re going to talk all about how this latest version compares to the previous one. But, before we do that, let’s set the stage for what we’re going to be discussing.

Second, if you would like to review some of the features of the previous version, Dragon Dictate Medical for Mac v4, click here. And, if you aren’t actually doing healthcare-related documentation, but you’re on a Mac, check out Dragon for Mac v5.

If you have Dragon Dictate for Mac v3 or v4, you can get a discount on v5 by purchasing an upgrade. And yes, the upgrade license does get you the full version of the program.

If you aren’t sure if you have version 3 or 4, click this link for instructions on how to find out.

If you already have Dragon for Mac Medical v5, you’ll want to get the latest update released since you installed it. Any bug fixes, improvements, and adjustments that Nuance has made to the application will be incorporated into Dragon, and you’ll be fully supported on the latest Mac OS operating system. And all for free.

Here’s how to get Dragon for Mac v5 updates.

If you have a profile from version 4 that you want to use in version 5, it should show up in your profile list automatically. You will need to run a brief upgrade on these profiles, which Dragon will prompt you to do so when you try to open them after installation.

If you don’t want to use your previous profile, but you have some custom Dragon commands that you want to keep, you can import them using these steps.

Why not let one of our expert Mac technicians install your Dragon software for you? Click the button to get started.

Now, let’s look at the specifications your Apple computer needs to meet in order for this version of Dragon to run successfully. All of this information can be found by following these instructions.

Dragon for Mac Medical v5 cannot be installed on a tablet or a phone. It requires one of these three Mac OS X versions:

If you have El Capitan, which is the latest version of the Mac OS, you need to be running at least version 5.0.1 of Dragon for Mac Medical. The chances are decent that you don’t have any updates installed, so be sure to check.

If you have a modern chipset, such as an i3 or i5, the thing to focus on here is clock speed. Nuance requires 2.4Ghz or higher.

If you have at least 4 GB, you’ll be fine. If you tend to have 3-4 applications open at once, or use Dragon heavily, 8 GB (or more) is advised.

You’ll need some free disc space, as the install files are quite large. Make sure your computer has at least 8 GB of hard drive storage space open—16 GB if you are installing from a download.

Dragon for Mac Medical v5 has full text control in MacPractice v5 notes fields. This means that you should be able to do everything Dragon can normally do in a text field. In other EHRs, Dragon will still transcribe your speech, but you may have limited functionality for selection, correction, etc.

If you have already purchased Dragon for Mac Medical v5, why not let one of our technicians install it for you and provide training. Click below to purchase a service package, and then call us at 877-488-8280 to schedule an appointment with our next available technician.

The EULA is the End User License Agreement—the document that spells out the legal details of using Dragon. In versions 3 and 4, the license agreement actually allowed you create profiles for more than one person. With this update, they’ve made a change to that provision.

Aside from medical vocabularies, HIPAA issues, and EHR support, there are two other areas where Dragon for Mac Medical v5 differs from the non-medical edition:

Now that we’ve reviewed some of the peripherals, let’s look at the major differences you’ll find in Dragon for Mac Medical 5 (compared to the previous version):

*Go to Preferences > General and then check “Launch Dragon at Startup.”

**Use the command “Show Dragon Pad” to open it.

If You Want to Know More

That’s it for now. Granted, we could go into further detail, but there’s a limit to how much you can take in at once. Hopefully, though, you got enough information to take your next step. We want to leave you with two things.

We’ve created a free Dragon command that will allow you to visit our site again by saying the phrase “Dragon support.”

If you’re totally new to the Dragon for Mac experience, or just need a little assistance with a few key functions, why not sign up for some training? We’d love to show you how the application works, and help you figure out exactly what you need to be effective—whether that involves a broad overview or the development of a specific Dragon skill.

Get Dragon Training
Get Support